Summer time is BBQ time and if you’re lucky like us you have a lovely circle of friends who all love food and whenever we get together it’s a big feast with plenty of stuff as we’re always scared we don’t have enough 😉 It’s always fun, pleasure and joy.. the only thing which often happens and I really don’t like it is that we often have plenty of left overs and I just hate to throw away food. It hurts me, especially knowing how much food is thrown away in times of huge hunger crisis in the world where people are not as well off as we are. That’s why I always try to make something out of left overs. Like yesterday when we had plenty of lovely Austrian sausages, grilled marrows and peppers as well as corn on the cob which hasn’t been eaten.

So what to do with it? After a long weekend of beaching, drinking and BBQs I was dying for a lazy evening at home tonight and I felt like something healthy. On the other side what to do with all that stuff? So I came up with a compromise solution: why not make a yummy salad with quinoa and some fresh greens as well as using my grilled veggies, the corn and small pieces of grilled sausages? Well, that’s the result and I must say it came out really nice 😀 I call it the All in one BBQ salad. 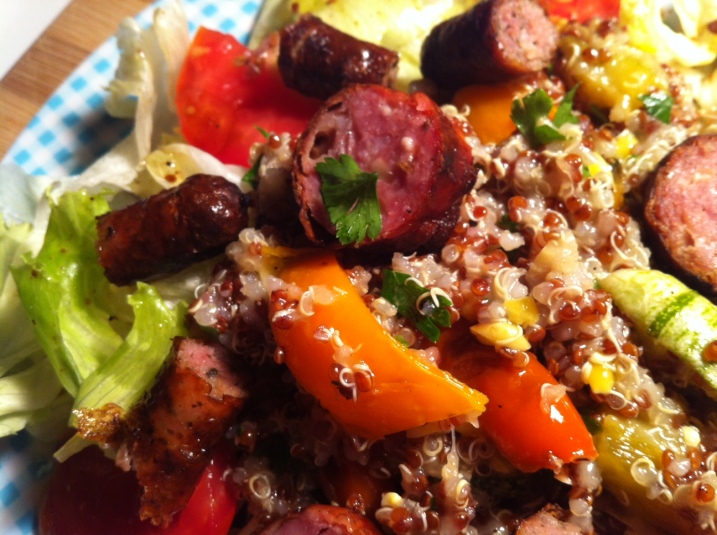 Cook quinoa according to instructions (mine was 1 cup quinoa, 2 cups of water for 20min). In the meantime prepare the green salad, tomatoes, mix a dressing consisting of olive oil, salt, pepper, a tea spoon of mustard, a hint of agave sirup and a  little water. Chop grilled veggies and heat up a griddle pan. When the quinoa is ready add a squeeze of lemon, salt, the chopped veg and the corn. Add fresh minced parsley and mix carefully. Fry the sausages shortly on high temperature and cut them into bite sized pieces . Prepare the plates with a circle of salad, drizzle with the dressing, put the quinoa veggie mix in the middle and add the